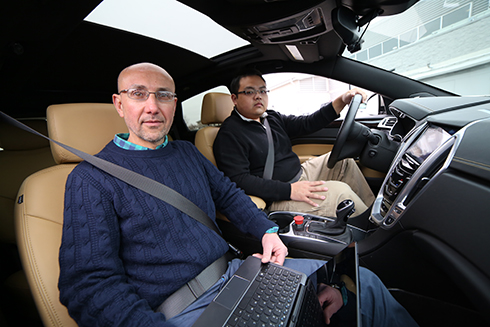 In addition to causing headaches, traffic congestion costs drivers and legislators time, money, and environmental resources. To address this issue, researchers at the Virginia Tech Transportation Institute have developed an award-winning automatic congestion identification model that can map and calculate the impact of weather and road visibility on traffic.

Their model will allow intelligent transportation systems to account for weather and visibility factors in automatic congestion identification. While most studies conducted to date typically rely on traffic speed, flow, and occupancy to predict and identify traffic issues, little research into the impact of weather on freeway traffic operations existed prior to the transportation institute study.

“The tool developed in this research is unique in a number of ways,” Rakha explained. “First, it uses statistical techniques to identify congested conditions as opposed to arbitrary cut-off speeds. Second, the algorithm is the first to account for weather and visibility conditions in computing the cut-off speed. Finally, the tool is being integrated with a bottleneck identification system to identify bottlenecks along freeways so that measures can be taken to mitigate the identified bottlenecks.”

The model created pinpoints the time and location of weather-related congestion, an important step towards better managing traffic problems in a cost-effective way.

With their algorithm, researchers at the institute used speed probe data along with weather and visibility conditions to build a transferable model for use on any road stretch. They analyzed data sets from major highways in Virginia, Texas, and California: Interstate 66 eastbound, U.S. 75 northbound, and Interstate 15 southbound, respectively. For each roadway segment, average speeds or travel times were collected every minute in real time and categorized by traffic flow.

Then, the team calculated speed distribution via a combination of components; the mean of each component was defined using different weather conditions and visibility levels as predictors. For instance, a vehicle’s cut-off speed was found to increase as the level of visibility on the road increased.

The research was funded by the Federal Highway Administration and the Mid-Atlantic University Transportation Center.