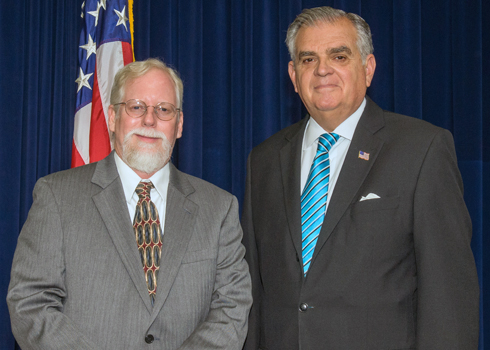 Thomas Dingus (left), director of the Virginia Tech Transportation Institute, was honored May 8 as a White House Champion of Change. The awards acknowledged those providing Transportation Technology Solutions for the 21st Century. Dr. Dingus is pictured with Secretary of Transportation Ray LaHood (right).

Virginia Tech Transportation Institute (Blacksburg, Va.) – The National Highway Traffic Safety Administration (NHTSA) found that more than 3,300 people were killed in crashes involving a distracted driver in 2011; 18% of crashes in 2010 were reported as distraction-affected crashes. These alarming facts are the driving force behind the revolutionary naturalistic driving studies undertaken at the Virginia Tech Transportation Institute (VTTI): to annually save thousands of lives through the prevention of distracted driving.

To accomplish this goal, VTTI has been iteratively developing its state-of-the-art data acquisition system. These units, which were created in-house, are able to gather continuous video and driving performance data in real-world driving conditions. To date, these systems have been installed in nearly 4,000 vehicles deployed nationally and internationally. This method of data collection and analysis provides unprecedented information about the causes of crashes to designers and policy makers who can develop countermeasures that will lead to reduced crashes and fatalities.

The impacts of VTTI research are widespread and considerable:

These studies represent only a small fragment of the work performed at VTTI. The Institute continues to conduct such significant projects as the Onboard Monitoring System Field Operational Test, which will result in the largest truck and motorcoach naturalistic data set to date. The Institute was recently tapped by the Motorcycle Safety Foundation to conduct the first large-scale, naturalistic motorcycle study. In fact, the national success of VTTI has generated research efforts on a global scale. Currently, VTTI researchers are leading naturalistic driving studies in Shanghai, Canada and Australia.

VTTI has provided lawmakers the ability to use substantiated research to educate the population about driving while distracted. The groundbreaking studies conducted at VTTI are led by researchers who are genuinely invested in reducing, and ultimately eradicating, the number of annual fatalities resulting from distracted driving. Director Thomas A. Dingus was recently named a White House Champion of Change for his exemplary leadership in developing or implementing transportation technology solutions. Under Dr. Dingus’ guidance, VTTI has grown from approximately 15 faculty, staff and students to become the second largest university-level transportation institute in the U.S. with more than 350 employees.

In all endeavors, VTTI personnel are charged with finding solutions to the greatest transportation challenges facing not only the nation but the world. In every sense, those of the Institute are dedicating their lives to saving lives.