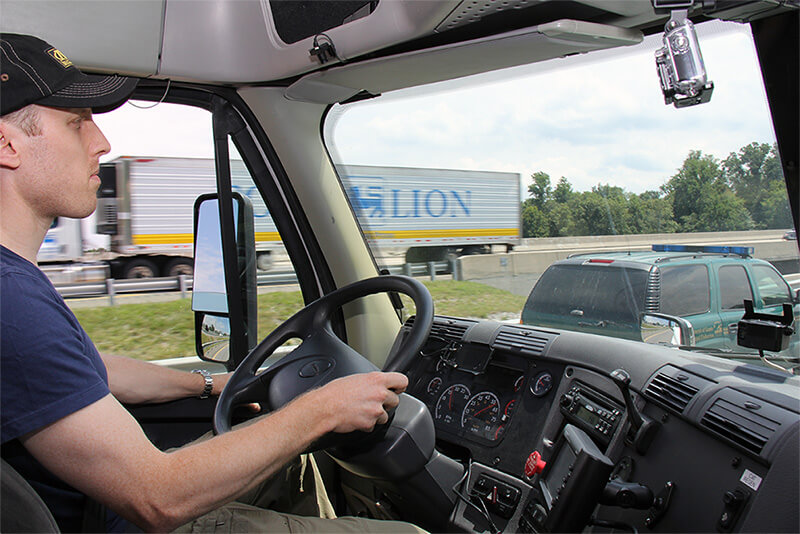 Blacksburg, Va., March 7, 2016 –Truck drivers who have obstructive sleep apnea and who do not attempt to adhere to a mandated treatment program have a fivefold increase in the risk of a severe crash, according to a new study co-authored by Virginia Tech Transportation Institute researchers and featured in the March 21 online edition of the journal Sleep.

While the treatment program analyzed in the current research article saw the removal of drivers who were non-compliant with the program, current federal regulations allow those drivers to keep their diagnosis of sleep apnea private, enabling them to work at another trucking firm.

“These results are important because, currently, drivers who are diagnosed with obstructive sleep apnea at a specific trucking firm with an internal mandated treatment program, and who choose not to accept treatment, can just quit and hire on with a firm that does not have such a program,” said Jeff Hickman, one of the article co-authors and a research scientist with the Center for Truck and Bus Safety at the Virginia Tech Transportation Institute. “Given the amount of job turnover in parts of the trucking industry, we can reasonably assume these drivers are going to drive for another firm. Essentially, as long as specific rigorous screening standards for obstructive sleep apnea are not in place, these drivers, if they remain untreated, are likely to remain a risk on the roadways.”

The researchers note that current federal regulations are the result of a previous lack of data available about the effectiveness of a mandated sleep apnea treatment program. However, the current study represents the first large-scale database available to determine how screening, diagnosing, and monitoring obstructive sleep apnea among truck drivers can affect their crash risk.

“Previous research has shown that obstructive sleep apnea is among the most common causes of excessive drowsiness or fatigue in the daytime, so this new analysis really underscores the risk truck drivers diagnosed with obstructive sleep apnea assume if they choose not to adhere to a treatment program,” said Erin Mabry, co-author of the research article and a senior research associate with the transportation institute’s Center for Truck and Bus Safety.

More than 1,600 drivers diagnosed with obstructive sleep apnea were compared in the study to an equal number of drivers who were deemed unlikely to have obstructive sleep apnea. Drivers who fell in the former category were provided auto-adjusting positive airway pressure treatment, which was objectively monitored. The treatment program was implemented by Schneider. Preventable, U.S. Department of Transportation-reportable crashes per 100,000 miles were compared across the study groups.

“What we found is that, if we look at 1,000 truck drivers each working for a year, the drivers with obstructive sleep apnea who refuse treatment would have 70 preventable serious truck crashes, compared to 14 crashes experienced by both a control group and by drivers with sleep apnea who adhered to treatment,” said Stephen Burks, lead author of the research article and professor of economics and management at the University of Minnesota, Morris.

Data collection and statistical analysis for the article were performed by the Truckers and Turnover Project research team at the University of Minnesota, Morris, which also included biostatistician Jon Anderson and several research students. The project’s work was funded by Schneider; the University of Minnesota, Morris; and the Roadway Safety Institute. Treatment was covered without out-of-pocket costs to drivers under Schneider’s employee health insurance. Virginia Tech researchers Hickman and Mabry collaborated on interpreting the results and writing the Sleep article, along with representatives from the Harvard Medical School and Precision Pulmonary Diagnostics.